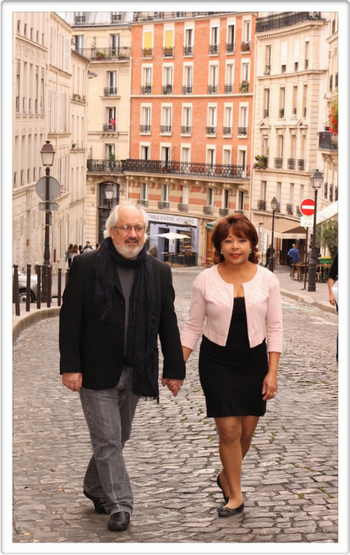 Pianist Gerard Hagen and singer Leslie Lewis, who were married in 2009, have been making beautiful music together in Paris and throughout Europe ever since moving from Los Angeles in 2012. "We have many duo gigs these days," says the pianist "We perform 12-20 times a month and 80% are as a duo. In recent times we've been to Morocco, London, Switzerland and Tokyo and soon we'll be performing in Guinea. In France, many of the small towns have a budget to produce concerts and quite a few feature jazz, so we've been all over France playing at festivals.” Leslie adds, "There are many opportunities for us in Europe. From Paris, we can go to Germany, Switzerland or Spain in an hour or two. We have a wide and broad audience and there are many people here who love this music and are very hungry for it."

Gerard Hagen and Leslie Lewis both had substantial careers before they met. Gerard, who was born in Bismarck, North Dakota, started playing piano when he was eight. "My parents had a rule that everyone in the family had to learn two instruments. I had two sisters and a brother and all four of us had piano lessons plus learned another instrument. In addition to piano, I played trombone early on and, as a freshman in high school, played electric bass in the school dance band." Gerard, who first discovered jazz as a teenager and was attracted to its swing and blues feeling, performed in many settings during high school. He earned a Bachelor Of Arts degree in piano performance from the University of Mary and a Masters of Music Ed. degree from Northern Michigan University. "In college, I learned how to be a professional. I played in local clubs, learned a wide repertoire of music and was prepared for anything." After he graduated, he moved to Los Angeles, worked with local rock and pop groups, played solo piano at restaurants, and gradually became an important part of the jazz scene. Gerard developed a forward-looking straight ahead jazz style that, while inspired by some of jazz's past masters, was quite individual and personal. The Gerard Hagen Trio with bassist Dominic Genova and drummer Jerry Kalaf was together for 17 years, recording such well-received albums as Far Horizons, Stay Tuned (both for the Sea Breeze label) and Song For Leslie (Surf Cove Jazz). In addition, during 2004-12, Gerard was an Associate Professor of Jazz Piano at Saddleback College, an experience that he greatly enjoyed. "I loved the energy that the students brought to the music. I always told them that they need to look at their musical heroes and what drew them towards those players. Then they should find the qualities within themselves that they have to offer listeners. Because of the internet and You Tube, they can build their own audience without necessarily getting a record deal first."

Leslie Lewis, who was born in East Orange, New Jersey, grew up around music and the church. Her aunt was a choir director who had her singing "Ave Maria" when she was three. "My parents were great music lovers and at home there was always classical, jazz, gospel and pop music playing." She had the opportunity to see opera at the Metropolitan Opera House while recordings by Sarah Vaughan, Nancy Wilson, Ella and Cleo Laine were a constant at home. Her first paid performance was in fifth grade when she sang at her teacher's wedding. "I really started performing regularly during my second year of college, working as a singer and dancer at Disneyland." Leslie performed at Disney World, at Nashville's Opryland, toured with the Cleveland Jazz Orchestra, and kept busy. She recorded "At Last" with the Tom Kubis Big Band and Jack Sheldon, acted on films and television, and sang a wide variety of music, always displaying a beautiful voice along with a solid sense of swing. Then she met Gerard Hagen.

"I spent my first 20 years in Los Angeles successfully avoiding working with singers," laughs Gerard. "But one day pianist Ron Kobayashi told me that if I ever get the chance to work with Leslie Lewis, I should do it. We happened to meet soon after that and she asked if I would do a gig with her. I remember that the first song we played was 'When I Fall In Love.' I thought that she sounded great. On the second tune I played some alterations and substitutions and, unlike with many other singers, it did not throw her off at all. On the third tune I added metric modulations and changed the rhythms; she did not even flinch. After the first three tunes, I knew that she could hold her own with anyone."

"When I started working with Gerard," remembers Leslie, "he said something that to me was life changing. He told me to stop thinking of myself as a singer and start thinking of myself as an artist. I loved his sensitivity on the piano and the fact that he really listened to what I do, never overpowering me. Gerard is also a fabulous arranger who brings out the best in me." Their professional and personal relationship blossomed.

In addition to their live performances throughout Southern California during 2008-12. Gerard and Leslie made several impressive and very enjoyable recordings including Of Two Minds (which has them joined by altoist Gary Foster, trumpeter Ron Stout, guitarist Larry Koonse, and Gerard's trio), the Brazilian-flavored Keeper Of The Flame, Midnight Sun (with a quintet that includes trombonist Joey Sellers and tenor-saxophonist Chuck Manning) and their duo album Leslie Lewis & Gerard Hagen In New York. Their joint releases are available from Surf Cove Jazz.

In 2012, Gerard and Leslie fulfilled a long-time dream by moving to Paris. They had visited previously, made many contacts, sat in at jam sessions, and discussed the scene with musicians. The time was right and they have worked steadily in Europe ever since. Their music has continued to evolve and recently, in addition to standards and originals, they have been exploring music from the 1970s, rearranging the songs to fit their style. "The older I get," says Gerard, "the less I am concerned about how our music gets labelled. If the music makes us happy to perform and we can be creative, that is the important thing. There is always a pretty strong rhythmic energy to the music that we play." Leslie adds: "The things that I most love about jazz are the freedom and the improvisations. I feel free to use my creativity to make every song my own." In addition to their collaborations, Leslie has been working with the great veteran organist Rhoda Scott while Gerard has begun teaching at the International Musical Educators of Paris College.

For the future, Gerard Hagen and Leslie Lewis look forward to making another recording and making music together often, particularly at festivals and concerts. Leslie sums it up: "We feel very blessed that we can make our living performing for so many different audiences. The response here has been tremendous."