It has been too long since I last posted to you. Many things have conspired to put me behind including computer problems, concerts, teaching, traveling, arranging, rehearsing, practicing, booking gigs and on and on.  Don't get me wrong, I'm thrilled to have all of these responsibilities, but I have had to prioritize and this newsletter, along with a number of other things, had to wait.

So I'm writing this on a new MacBook Air and getting used to using an AZERTY keyboard which is what is sold in Europe.  It is possible to get a computer with a QWERTY keyboard but I didn't have the time to wait for a special order so instead it is taking three times as long as what would be normal for me to type this newsletter. 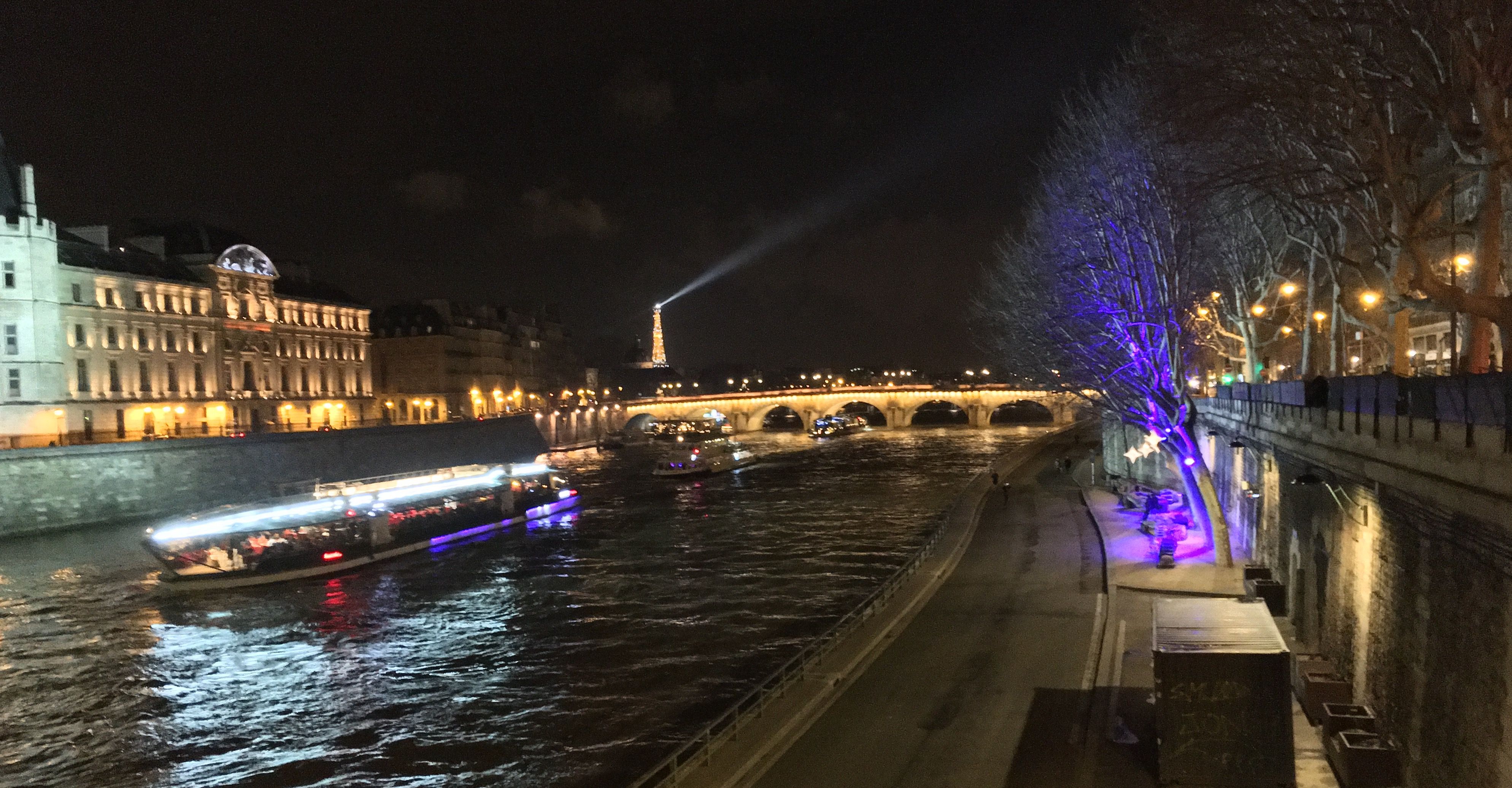 Leslie and I love to walk in Paris at night.  This was taken on a Sunday night as we were crossing the Seine to the left bank where we live. 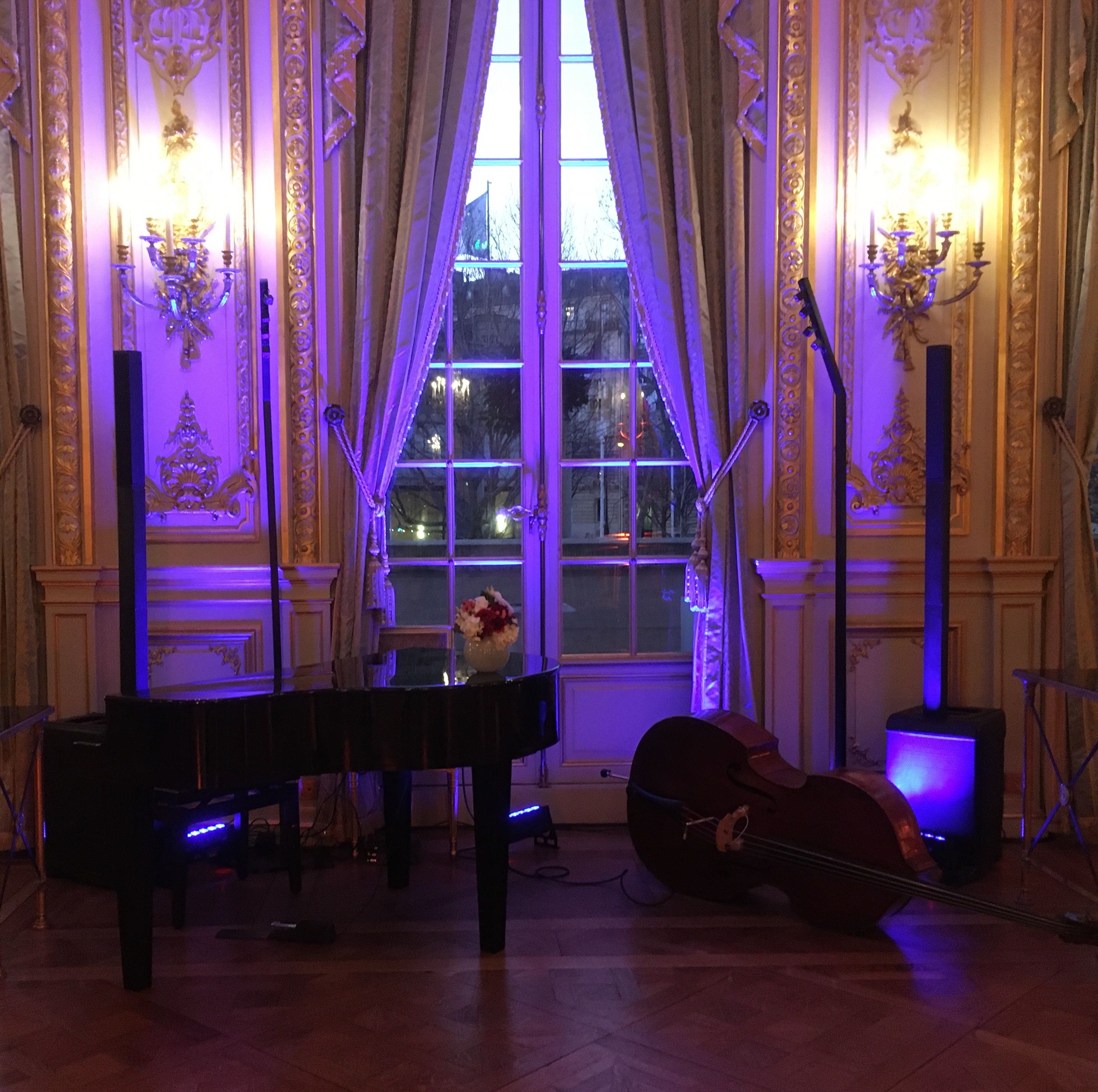 Leslie and I played a "concert privé" with bassist Clément Blumen in a beautiful room in Paris. 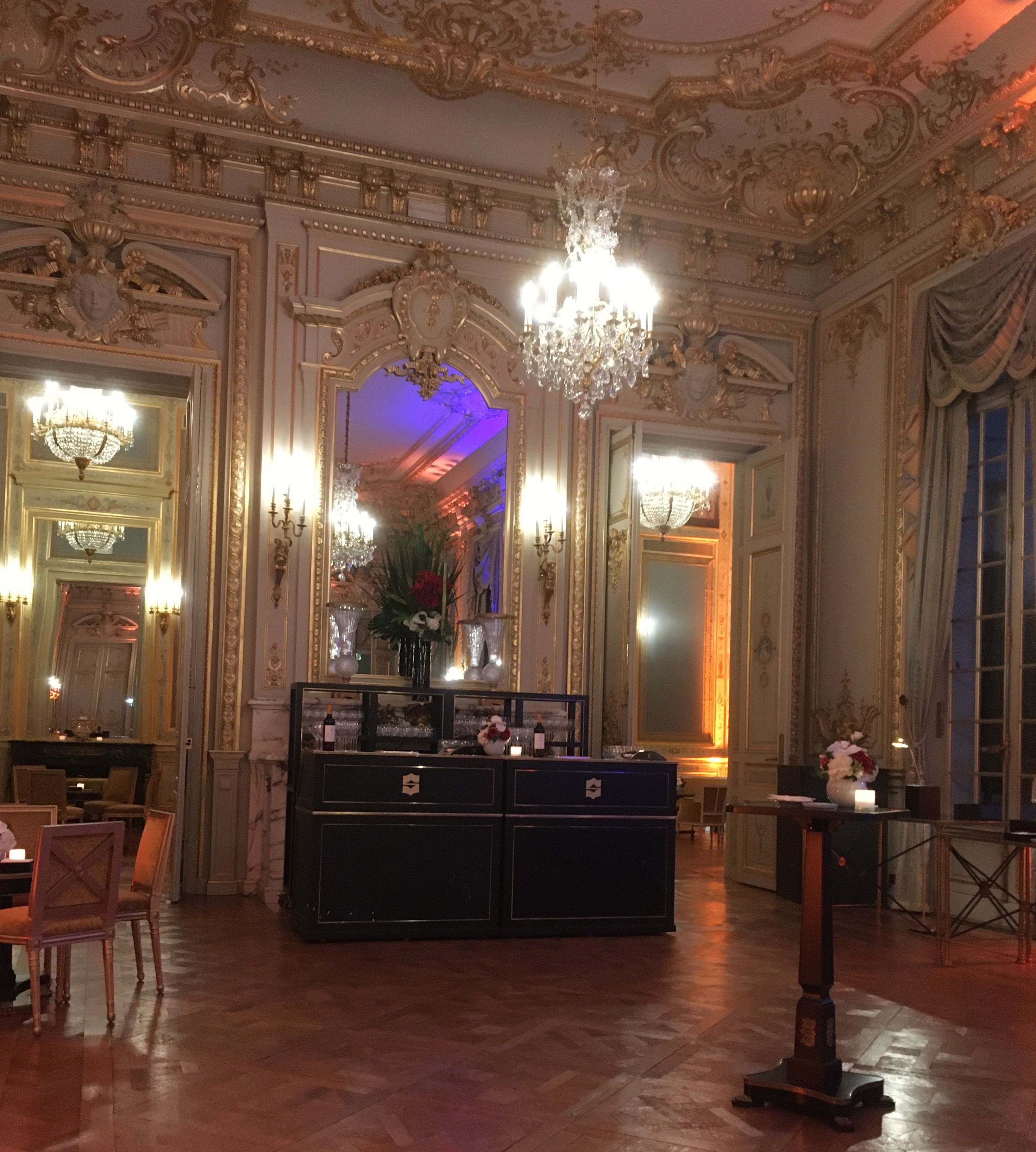 What is a "concert privé" without a "bar privé"? 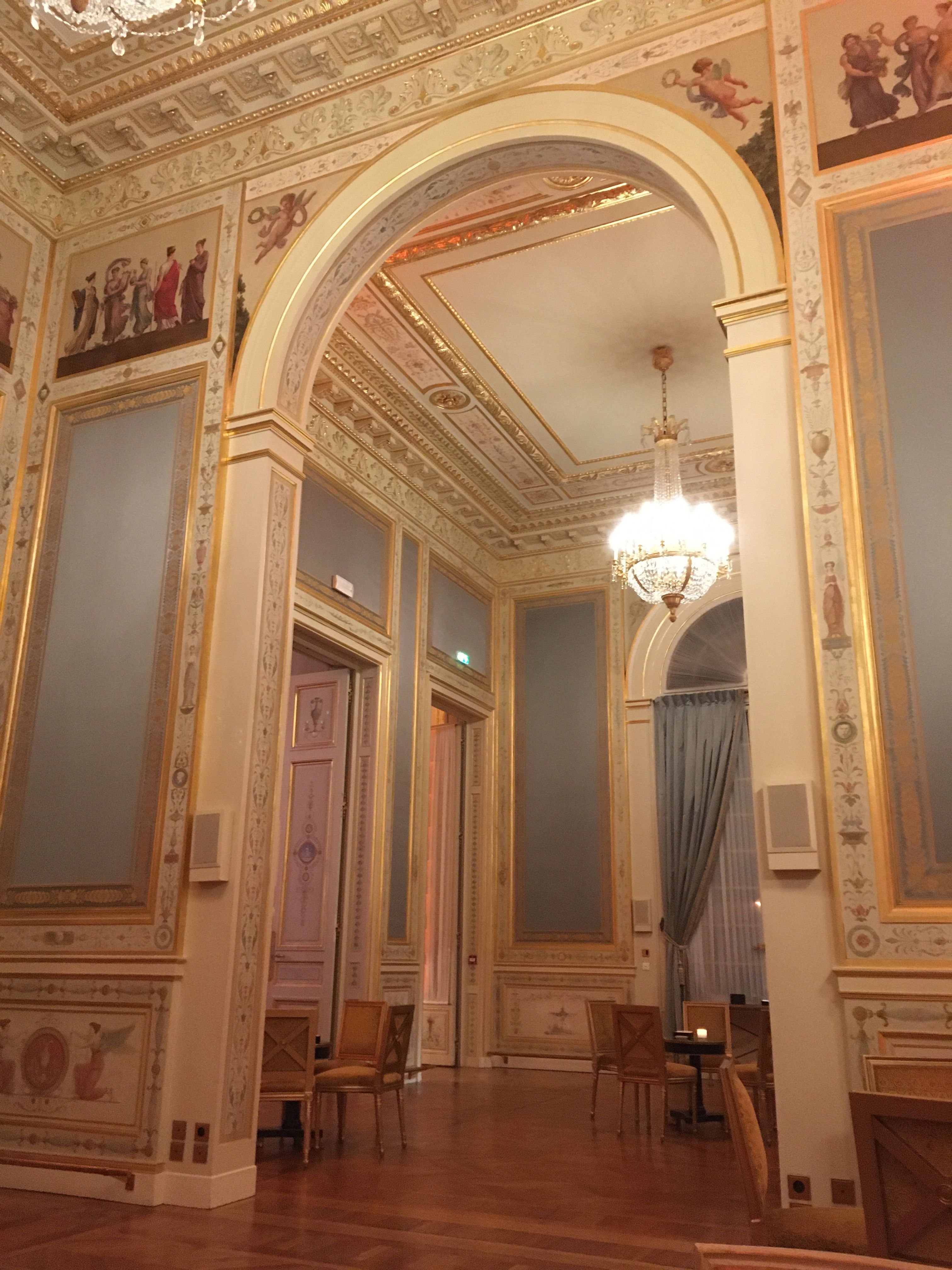 In the past two months there were road trips to Cérans-Foulletourte, Le Mans and  Bagnoles-de-l'Orne-Normandie. Nothing too note worthy there, but our pre-Christmas trip to Madrid was killin'.  We had three days in Madrid returning to Paris on December 23rd. The purpose of the trip was to see our friend Mariya who recently moved from Los Angeles to Madrid. Lois, a good friend to Leslie, me and Mariya, traveled with us.  There was a transit strike in Paris during that time, it was incredibly disruptive.  Fortunately it really only affected us on a few occasions, largely because most of our work is a 5-10 minute walk from our home. But since the strike lasted for a number of weeks, getting to and from airports, train stations and one or two of our gigs was a bit of a hassle. I did have to cancel one gig because the métro and buses were not running and even if I could have gotten a taxi, Uber, Lyft, Bolt, or Kapten which was not at all a sure thing, the streets were so crowded that a 15 minute drive was likely 2 hours. All of that was forgotten once we arrived in Madrid.  Like Paris it is a pretty walkable city, but it soon became clear that driving there is another matter entirely.  I thought that it might be a bit like Barcelona but it has it's own personality. As is normal for us, we prefer to explore the neighborhoods in the cities that we visit rather than hit the tourist areas. So we fell into a routine of afternoons searching for the areas in town that offered interesting things to see and evenings spent in restaurants with good food and friends. There was no music on this trip, sometimes it is good to get away from all of that. The people of Madrid were very warm and hospitable, but then again we live in Paris so the hospitality bar is set pretty low. Nevertheless it was a very enjoyable few days in a lovely city. 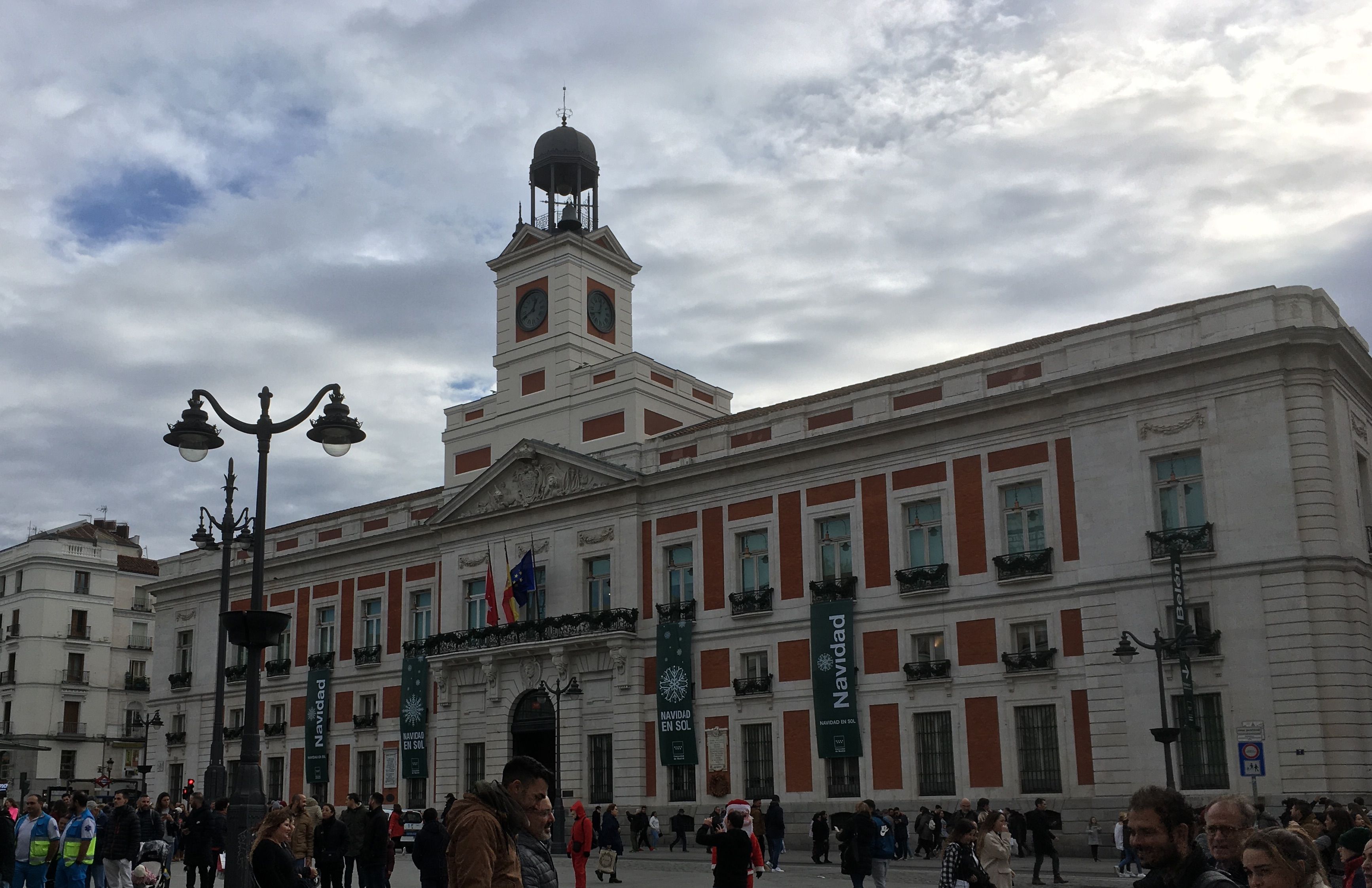 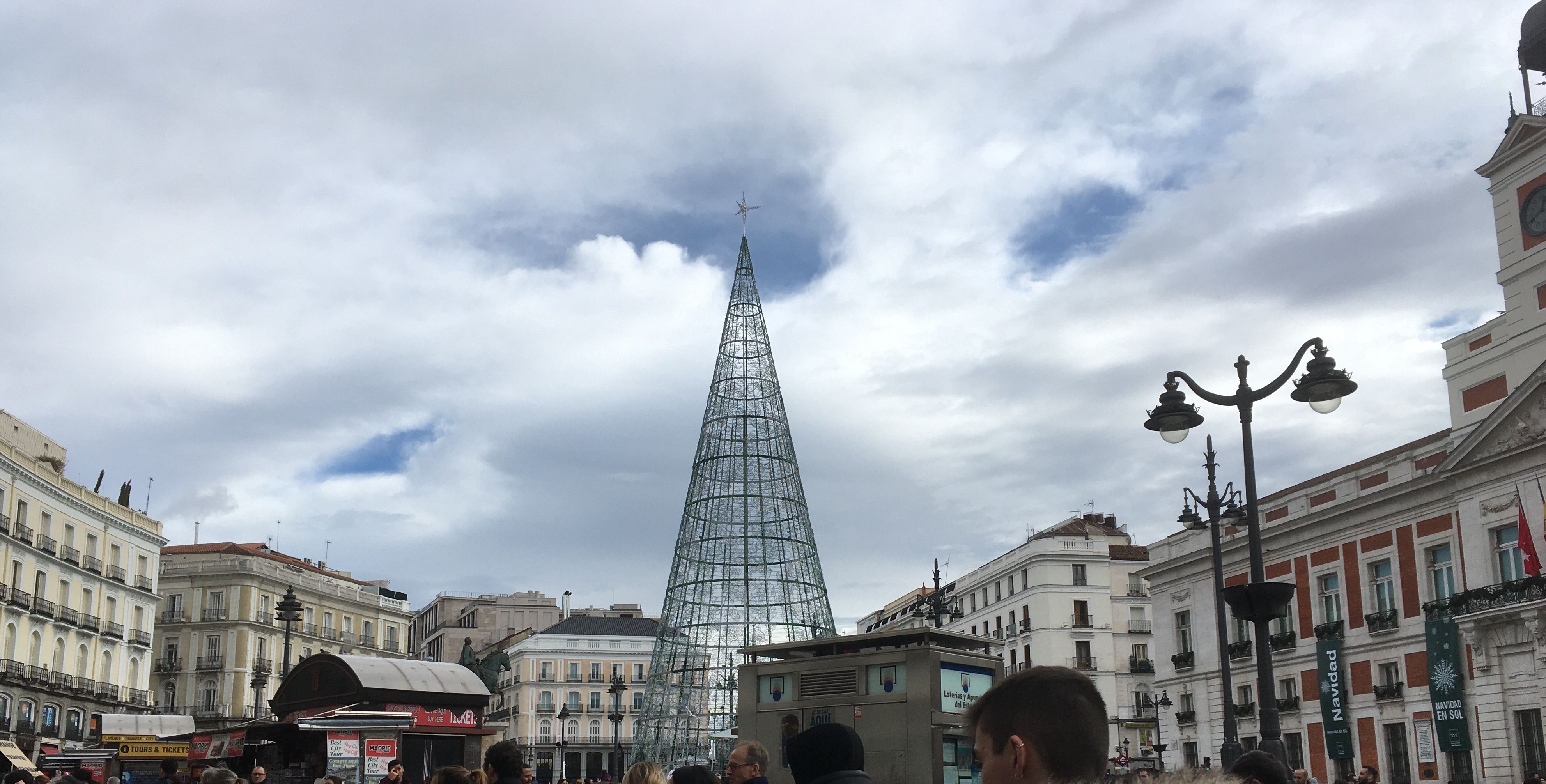 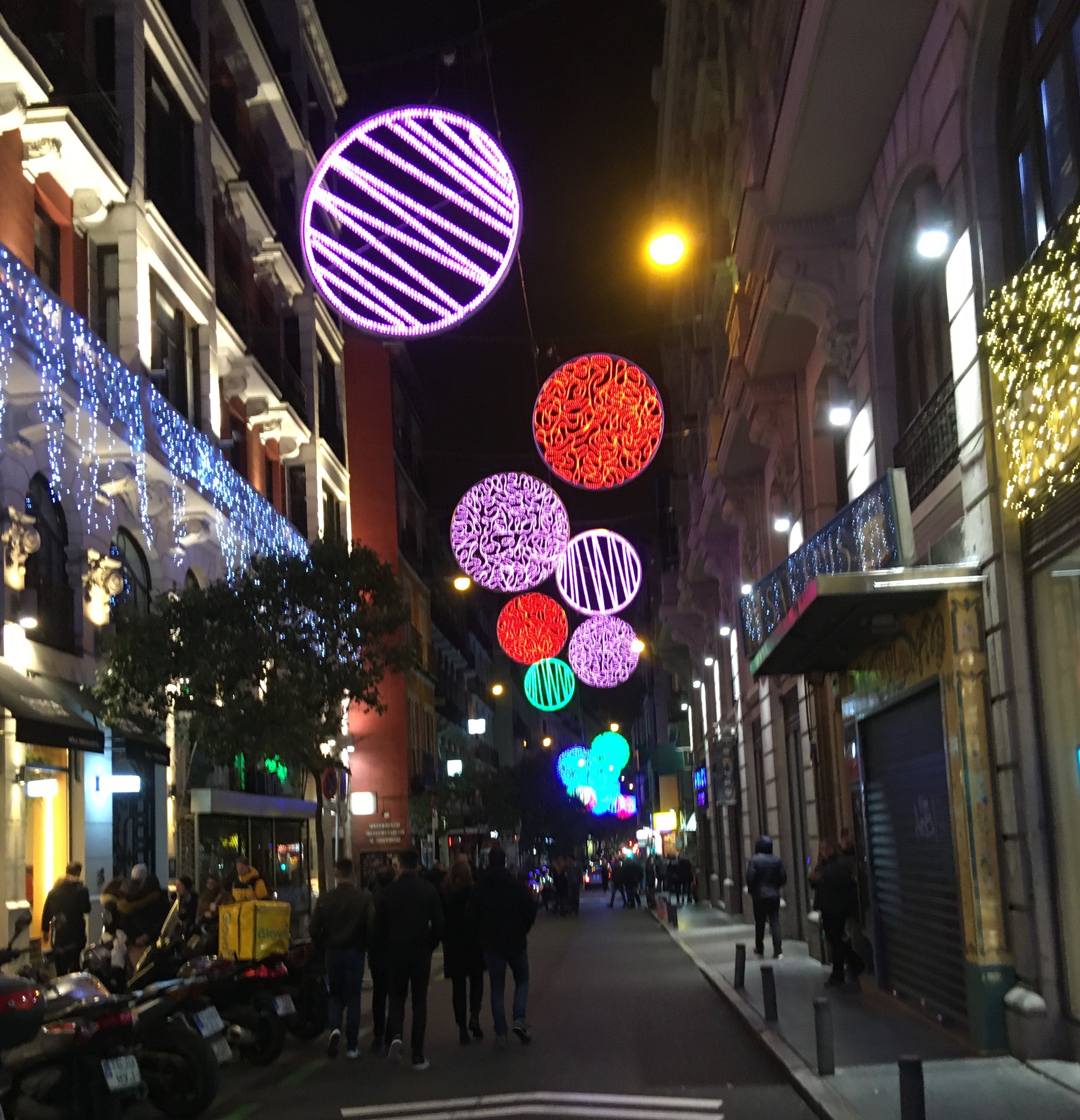 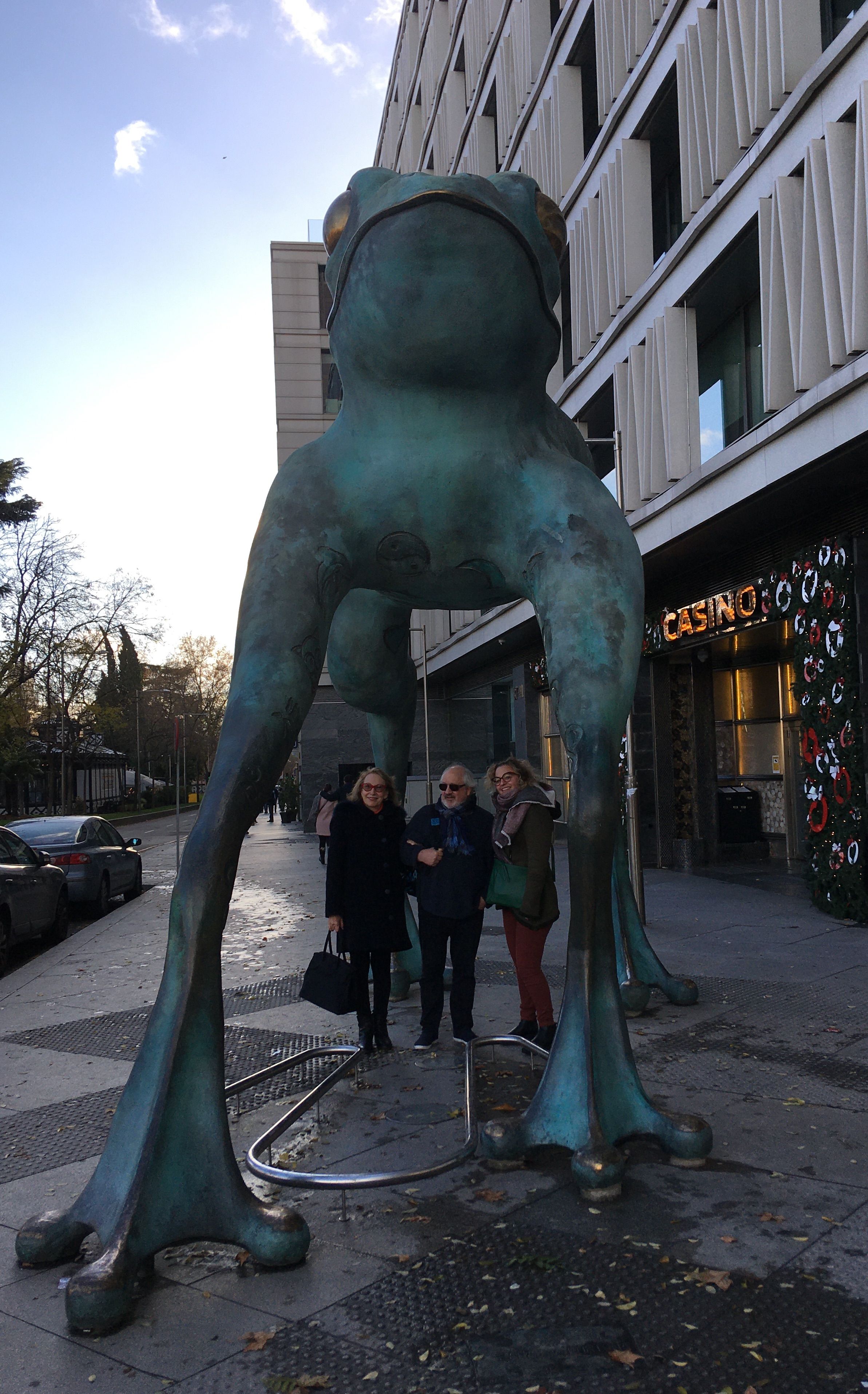 Lois, Gerard & Mariya under a huge frog in Madrid, Spain. 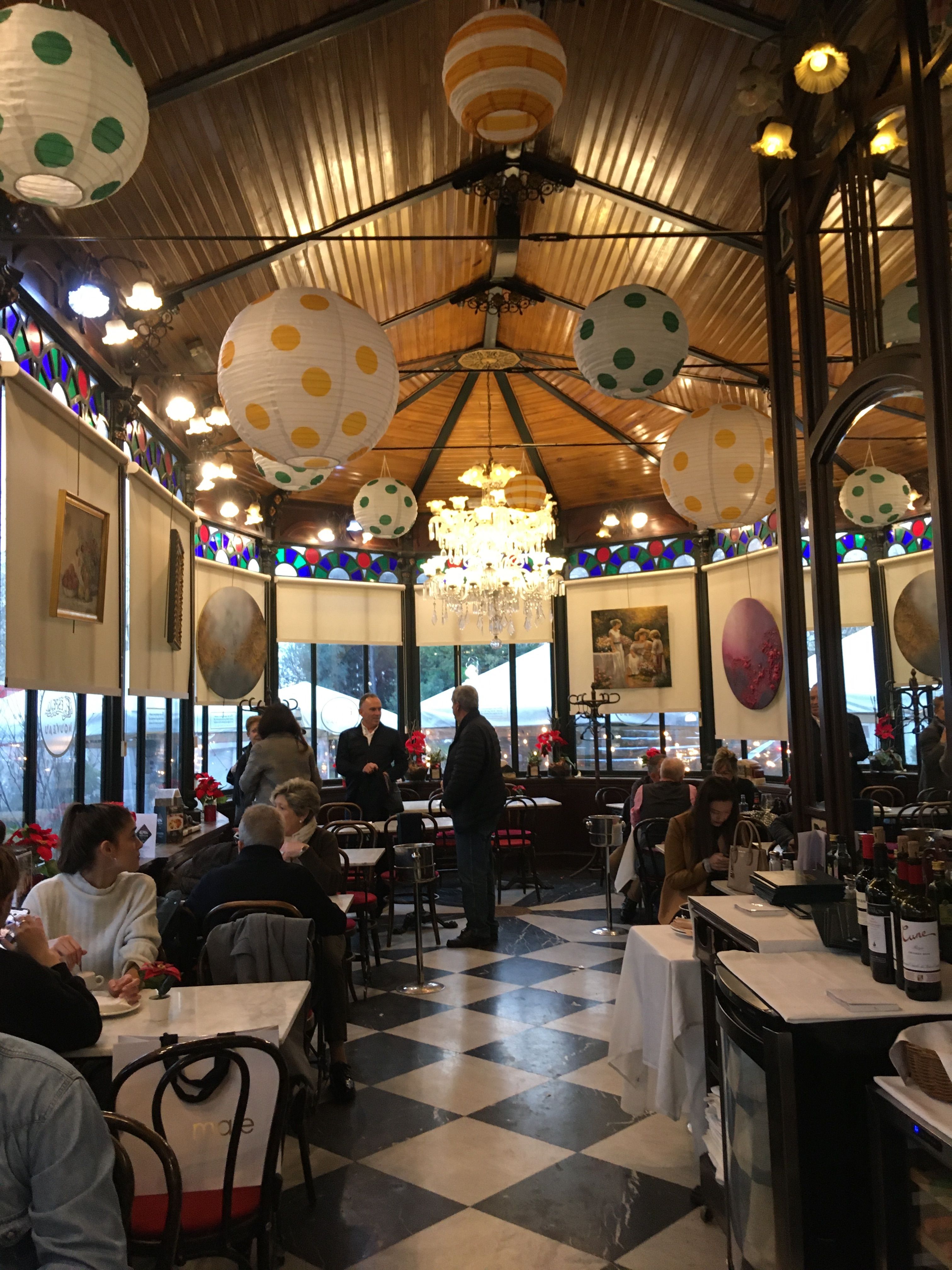 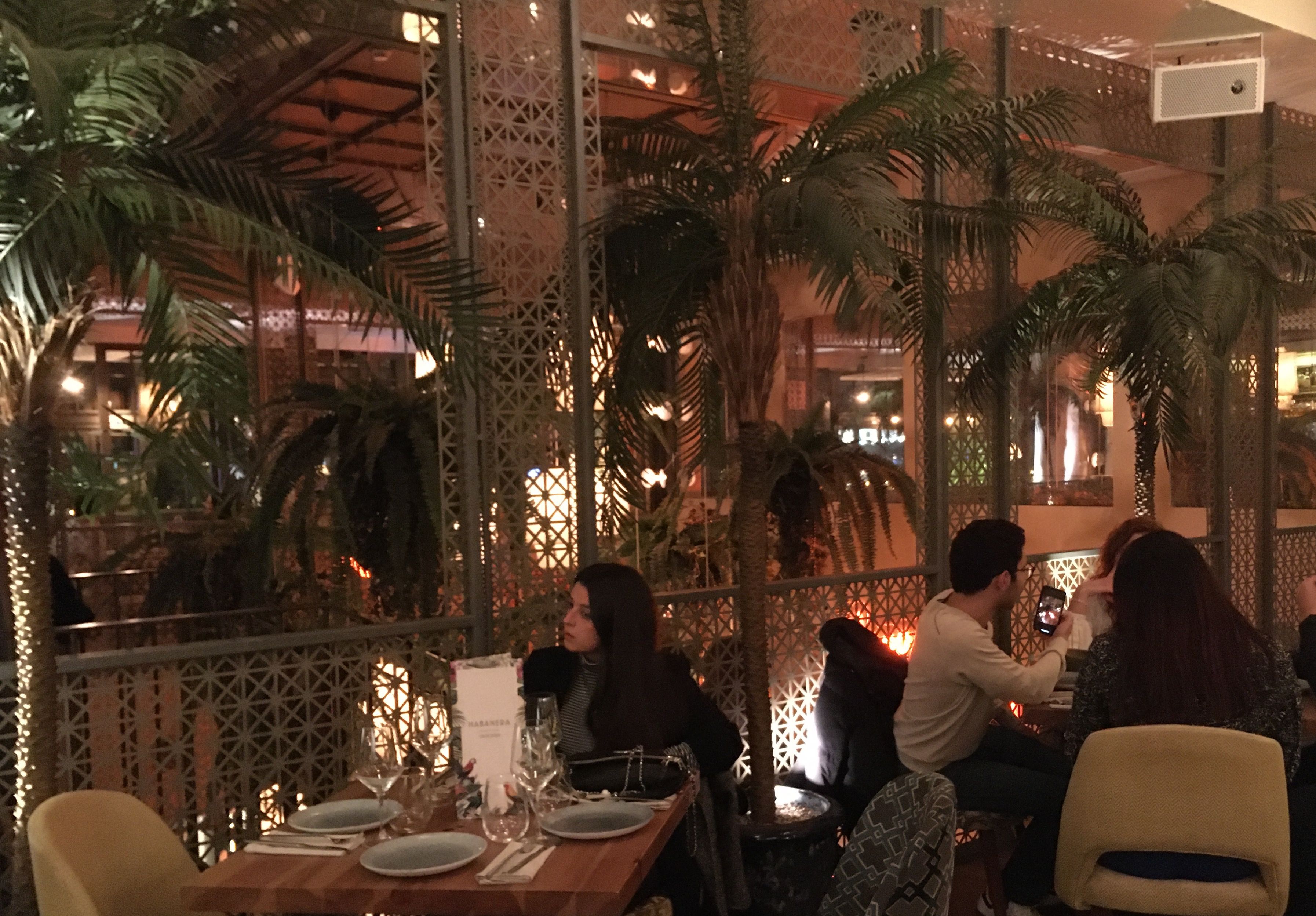 We have had our regular dates at Chez Papa Jazz Club, Café Laurent, Monteverdi and Bar Josephina in the Hôtel Lutetia but Leslie started the year as a part of a "Women In Jazz" concert series that was hosted by Sacha Boutros at Le Duc des Lombards jazz club in Paris. The show featured Sacha with Leslie, Michele Hendricks and Janis Siegel.  The three shows were all sold out. The night with Leslie and Sacha was a spectacular evening largely due to their individual artistry as well as their repartee on stage.  Unfortunately Leslie and I were working on the nights that Michele and Janis sang so we missed them, but the reports on their shows were fabulous. This weekend we are doing a concert of Nina Simone's music at Sunside Jazz Club in Paris.  https://www.sunset-sunside.com/2020/2/artiste/1852/6797/.  Be sure to come if you are in Paris.  Please pardon the following shameless plug, use this code 20LL222 to receive a 4€ reduction on your ticket. Based on advanced sales the room will sell out so don't wait.  I have been busy writing arrangements for the show,  based on the rehearsals that Leslie and I have had, I am really excited to hear them performed by the quartet. We are thinking that down the road we could tour with this show.

Although I have this week off from teaching there is always something that needs to be prepared, graded, or researched.  Earlier in January I was asked by some of the students at IMEP to give them a masterclass on playing Be-Bop melodic lines which was both heartening and terrifying in almost equal measure.  I had to think this one through since these were pretty advanced students so they already had some basic understanding of the subject.  Ultimately I came back to using musical examples from Charlie Parker, Dizzy Gillespie and Monk to give them what I hoped were some practical ways to practice and ultimately make playing Be-Bop more natural for them.

For those of you in Paris or if you’re planning to visit, here is our February/March schedule to date.

Thank you to everyone who has already downloaded "Fragile", our new recording.  It is available as a download on CD Baby at this link.  https://store.cdbaby.com/cd/leslielewis5

Thanks for staying in touch with us. 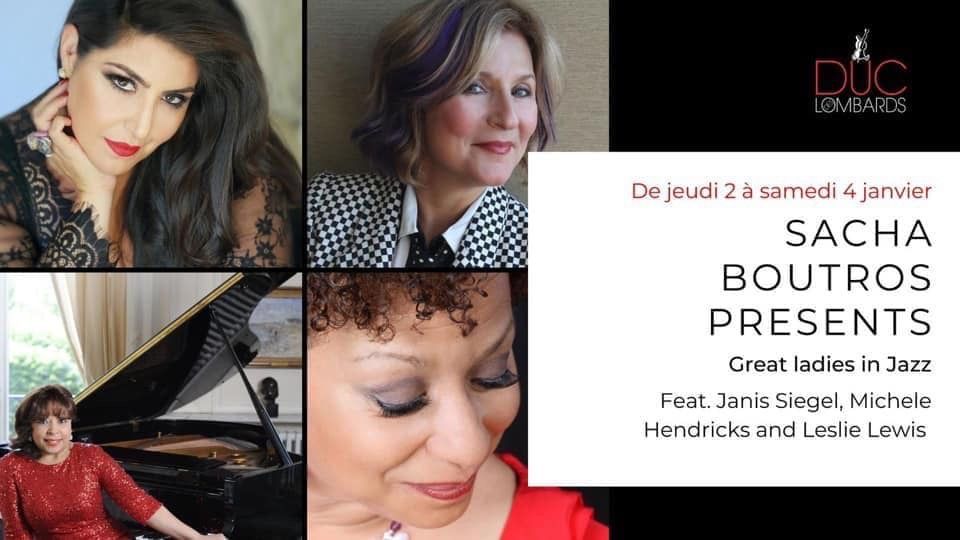 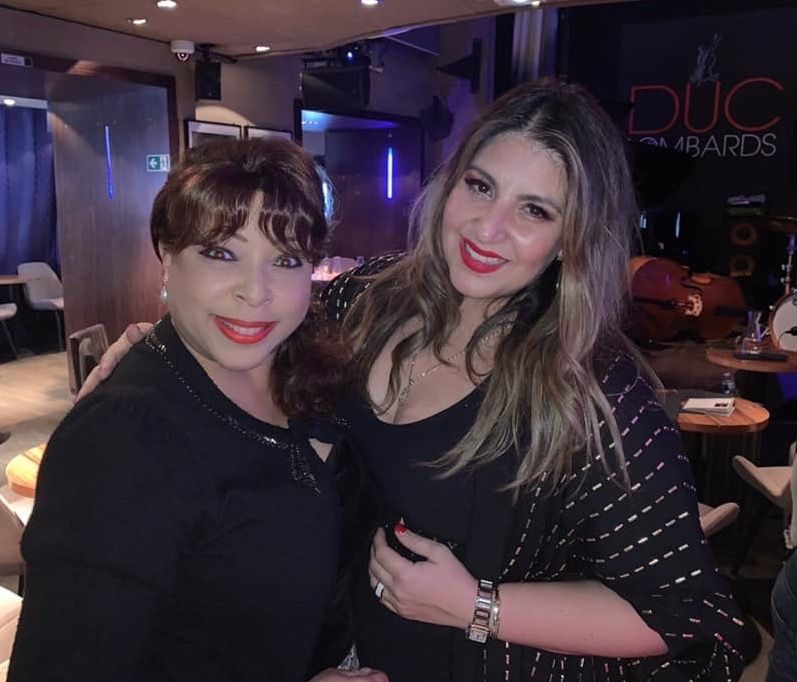 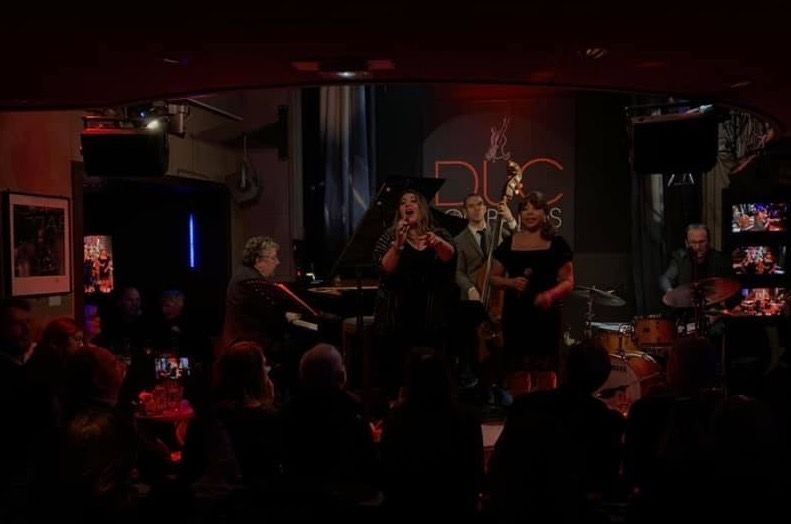 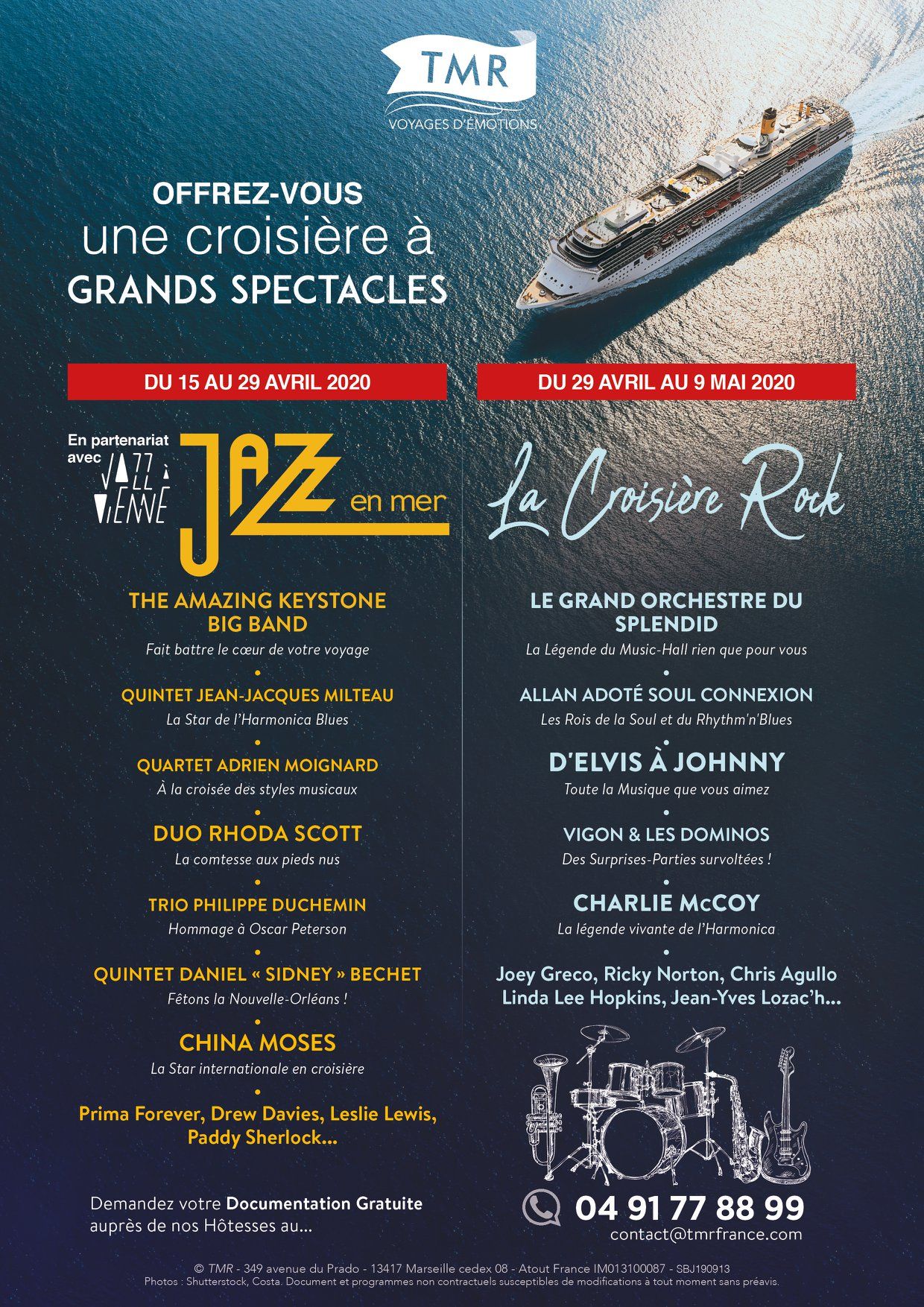 Promo poster for the up coming jazz cruise this spring.